July 23, 2013
Of all the tribes of Israel, why is Levi singled out as those assigned as priests in the temple?  Did they receive a land inheritance with the other tribes?  What are we to make of the sons of Levi offering up an offering in righteousness?

Levi and Simeon - two of the twelve sons of Jacob (Israel) - were rather impertinent individuals.  They were "instruments of cruelty," quick to anger, and murderers (Gen. 49:5-6).  As a result, they would be cursed and scattered within Israel.  Simeon received a land inheritance, but it was surrounded by Judah and eventually assimilated, never to be recognized individually again (Deut. 33).  In the great census of Moses (reason for the name of his book of Numbers), Levi is specifically excluded from the rest of the tribes (Num. 1:47-49).  The tribe of Levi was not given a land inheritance like the rest of the tribes, but was scattered throughout the area (Josh. 13:33). 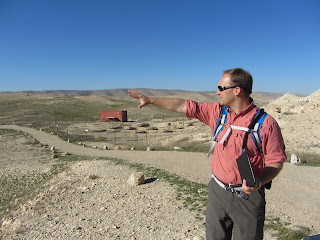 Stratford pointing out parts of the Negev, portions of which were given to Simeon

During and after the Exodus, Aaron and his sons were chosen to minister in the priest's office (Num. 3:1-3).  However, Aaron's first two sons "died before the Lord, when they offered strange fire before the Lord, in the wilderness of Sinai, and they had no children" (Num. 3:4).  Aaron had two other sons that ministered, but they required additional assistance.  The Lord told Moses to "bring the tribe of Levi near, and present them before Aaron the priest, that they may minister unto him.  And they shall keep his charge, and the charge of the whole congregation before the tabernacle of the congregation, to do the service of the tabernacle. ... And thou shalt give the Levites unto Aaron and to his sons: they are wholly given unto him out of the children of Israel" (Num. 3:6-9).

As a result of Aaron's presidency over the priesthood conferred here and of the Levite incorporation, this lesser priesthood is often referred to as the Aaronic or Levitical Priesthood.  While the names are used pretty much interchangeably, differences did exist in the offices held (evident in later references to priests and Levites - John 1:19, 1 Kings 8:4).  Levites held the priesthood, but only sons of Aaron could hold the office of priest.  "The priests could offer sacrifices for the people, burn incense on the altar, and teach the law, whereas the other Levites were employed in more menial tasks, such as the housekeeping of the tabernacle, keepig oil in the lamps ... and related tasks in assisting the priests" (BD - Aaronic Priesthood). 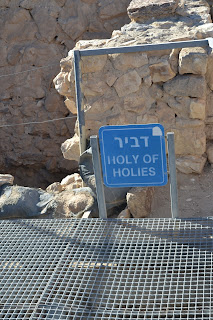 Temple at Tel Arad, in the Negev

In the last days, the Levites must make an offering to the Lord in righteousness (Mal. 3:3, D&C 13).  The Prophet Joseph Smith taught that sacrifice has always been connected to the duties of the priesthood, and that when the Temple of the Lord is built, the sons of Levi will be purified and help restore all things, including sacrifice.  This doesn't include restoring all the rites and ceremonies of the Law of Moses, but does include things existing before Moses' time, particularly sacrifice (Teachings, pp. 172-73).  President Joseph Fielding Smith further commented about our dispensation of the fullness of times where all things are to be gathered and restored: "It will be necessary, therefore, for the sons of Levi, who offered the blood sacrifices anciently in Israel, to offer such a sacrifice again to round out and complete this ordinance in this dispensation.  Sacrifice by the shedding of blood was instituted in the days of Adam and of necessity will have to be restored.  The sacrifice of animals will be done to complete the restoration when the temple spoken of is built; at the beginning of the millennium, or in the restoration, blood sacrifices will be performed long enough to complete the fullness of the restoration in this dispensation.  Afterwards sacrifice will be of some other character" (Doctrines of Salvation, 3:94).

So what does this have to do with me right now?  Good question...  I think we relate to the tribe of Levi in many ways.  They, like us, were compelled to leave the society of God, and as a result of their sins, they would be cursed and scattered forever.  However, the Lord had great mercy on them, and brought them back into His chosen people as they lived up to His requirements.  The Levites were not born into their callings initially, but were adopted in.  We are also adopted into the Lord's society, and as we make righteous offerings unto the Lord (specifically temple and missionary work), we will be given the Lord's power (including priesthood power and blessings) and fully accepted as heirs of God. 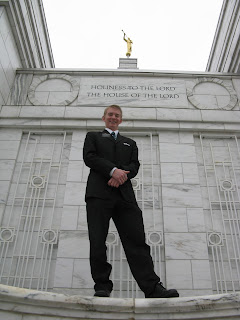